With hopes of Sumbisori[1] becoming a world heritage.

The 2012 Jeju Haenyeo festival was on September 8th and 9th.
It was held in the vicinity of the Haenyeo Museum, Sehwa Port and Hado-ri bay.
The festival is primary to honor the archetype women of Jeju, the haenyeo.
As expected, there were many types of seafood to enjoy.
Let’s enjoy the festival unique to Jeju.

On the way to the festival, I spotted the billboard advertising the Haenyeo Festival.
Although it was raining slightly, it was a perfect day for sightseeing.

▲Site map of the Haenyeo Festival

It was well placed and easy to comprehend. 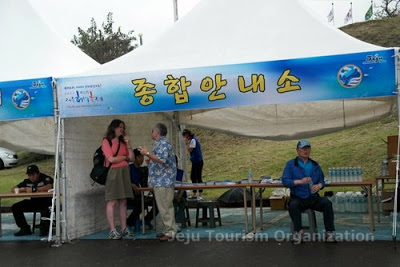 The information kiosk was handing out a brochure, hand fan, and a bottle of Samdasu[2].
It was nice to be provided with these amenities. I have heard of the Sumbisori road where the haenyeos frequent. It would be nice to visit it in another time. 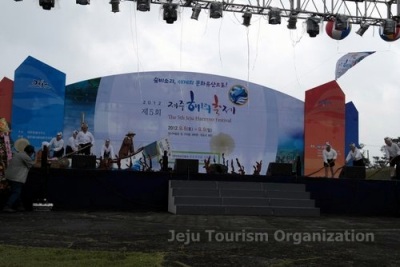 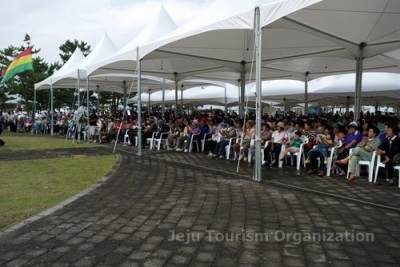 There were scheduled performances at the main stage.
The crowd seemed to enjoy the upbeat music and the Jeju dialect.
The Jeju dialect may sound a bit crass, but it grows on the listener.

The food stands were stationed here.
Of course, this area was bustling with people sampling different kinds of dishes.
There was an abundance of different seafood like, halibut, abalone, yellow corvina, conch, shrimp and more. They were both fresh and delicious. 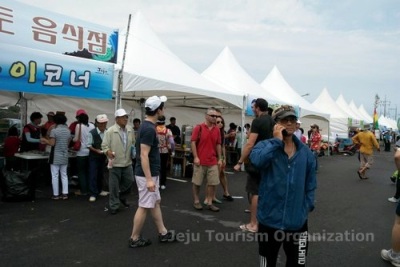 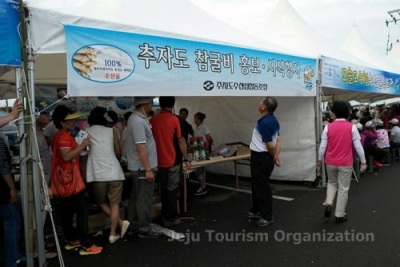 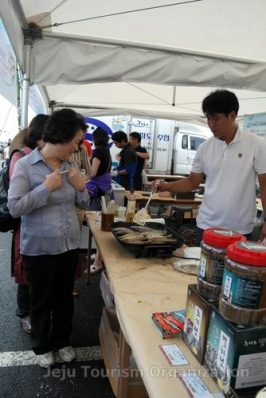 I made my way through the food stands and on to the main event of the Haenyeo Festival, the Muljil[3] Competition. 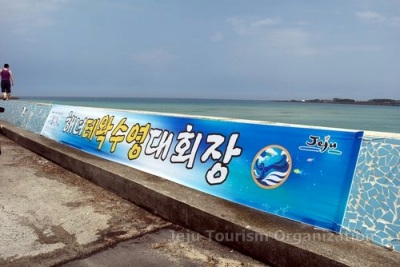 The centerpiece events of the festival are the haenyeo muljil and tewak[4] swimming competitions. 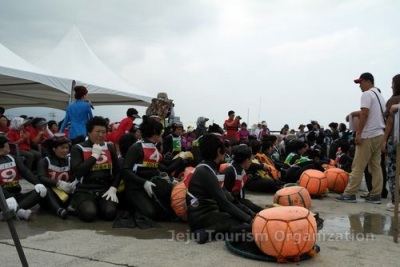 The haenyeos are queuing for the competition. 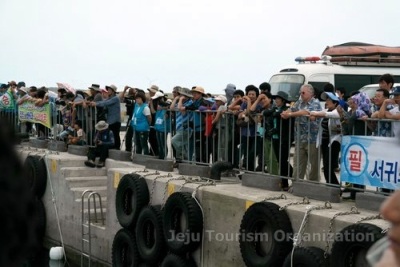 There was quite a crowd to spectate the tewak swimming competition.
After passing through the 100m preliminary rounds, competitors proceed to the 200m final.
Swimming with the haenyeo diving suit and webbed feet was impressive to say the least, especially by middle-aged women. 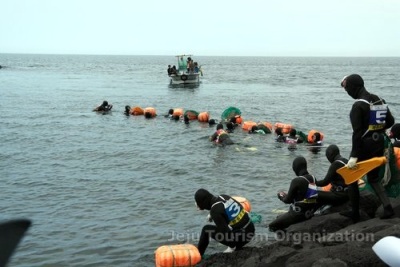 The winners of the muljil competition are determined by the number of conches collected.
I was able to appreciate the ardor and strength of the haenyeo.
To collect seafood by diving into the ocean isn’t exactly a walk in the park.

After 30 minutes, the haenyeos returned with sacks of conch. There were others photographing the tewaks filled with conch. I had to fight the crowd to snap a picture of it, and indeed there were mounds of conch.

Although it was fun for spectators, it must be tough for the henyeo.
I felt especially maudlin when the sight of the haenyeos leaving seemed to resemble my mother.The culture of the haenyeos is slowly fading away, but at least it is still prominent in Jeju. I hope that this tradition is preserved for time to come.
To see the post by the Haenyeo Museum: http://jejutourism.blog.me/90150411117
Henyeo Museum Website: http://www.haenyeo.go.kr/
Address: 3204-1 Hado-ri Gujwa-eup, Jeju, Jeju-do, South Korea
Phone: 782-9898, 710-7771~5
Hours: 9:00-18:00
Admission:  ₩1,100 for adults
Jeju Tourism Website: http://www.jejutour.go.kr/,  http://www.ijto.or.kr/
[1] Sumbisori: the sound of henyeos exhaling after emerging from a dive. The sound resembles that of a whistle and the ocean breeze.
[2] Samdasu: bottled water from Jeju’s Hanla mountain.
[3] Muljil: The act of diving into the water done by henyeos to collect sea creatures.
[4] Tewak: a buoy with a mesh sack attached used by henyeos to hold the collected seafood.