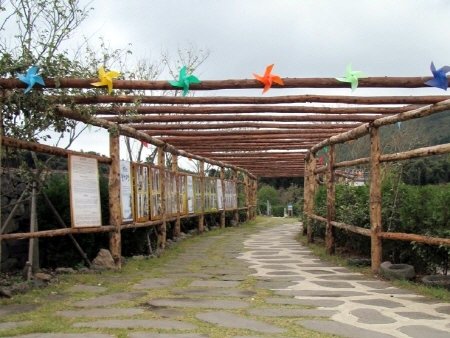 From June onwards summer will kick into gear on Jeju Island and it might well be the perfect time for a visit to Jeju Maze Land.

One of the themed mazes models itself on Jeju’s famous dolhareubangs (stone grandfathers) and you’ll find a lot of photographs of them lining the way towards the maze entrance.

If you take a closer look you’ll notice each one is a little different too.

That’s because following every compass direction on Jeju Island will lead to a slightly different direction of cultural development.

Geography plays a large part in this.

The coastal villages stretching east and west didn’t have much communication in times past. Villages on the north and south had Hallasan in the way preventing easy lines of communication.

Look at the dolhareubang photographs and you can see this.

As I’ve told you before Jeju isn’t such a small island.

When you enter Jeju Maze Land you’ll also be entering a maze based on wind with a circular shape. Some 2,700 Thuja cypress trees create the walls stretching over 1 km. These trees can grow over 20 meters tall.

After the wind maze is the haenyo maze. This one is based on Jeju’s famed women-divers and in particular the shape of a diver walking home after the day’s work is done.

The two mazes combine to form a giant seashell with the wind maze making up the body. The haenyo is the head.

Unless you see these from the sky I guess you can’t get a full appreciation for the shape, but a nearby observation deck allows to get some perspective.

Anyway just these two mazes alone will help negate any fatigue you’re feeling. You’ll also get a helping hand from the Layland and Thuja cypress trees which release a relaxing chemical through their scent.

If you breathe this phytoncide your stress decreases and your lungs and heart will function better. It also helps kills germs.

This is the  entrance to the dolhareubang maze.

As you can see it is even shaped like a dolhareubang. I took a look at the map to help me remember the way, but once inside I quickly forgot.

The stones are made of basalt and to make this maze the owner worked for 10 years to collect the stones. His passion is quite impressive.

This is a photograph from the observation deck.

I should also point out the redish-brown stones and powder as you walk. This is very special. It is a mineral known at “Jeju Scoria” and is only found on the island.

For tens of millions of years it matured in nature and absorbs many things well. Infra-red radiation and negative ions. When turned into a cosmetic it will clean up your skin’s sebum oil which is especially prevalent on the face.

However I have to tell you it is a protected resource. You cannot take it away from the island without permission especially in its raw form.

So while walking this maze you may well feel like your skin condition is improving.

Once you’ve found your way out an achievement bell will ring. It isn’t a physical one. It is a sensor bell that catches you quite by surprise.

If you really can’t find your way out of the maze there’s a QR code available for your phone which will lead to an app and a mini dolhareubang character to help out.

Dot Oreum is in the background too.

Inside the building there’s a chance to see Minotaur artwork from ancient Greek mythology. 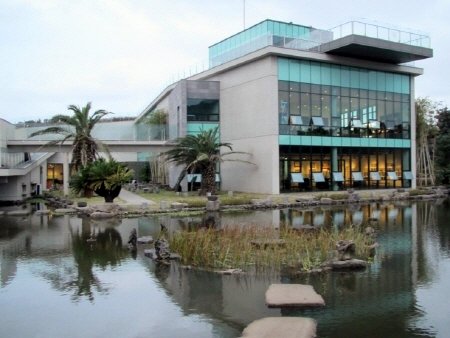 There are also some figurines.

I have to say I was surprised by the disabled access for the maze park. Later I found out that the owner is also the chairman for a social welfare foundation on the island.