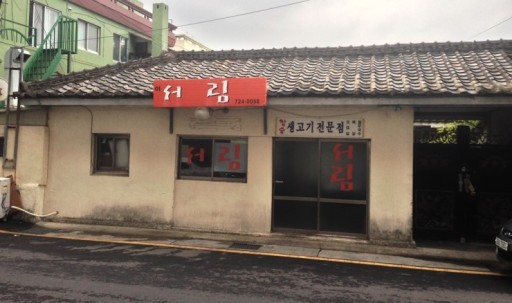 As you can see from this photograph it doesn’t look like a restaurant at all.

Looking carefully at the sign we also discover the owner has added an “I” in front of “Seorim”.

“Seorim” sounds like bookstore in Korean so maybe it was a bookstore long ago that changed into a location to eat.

But I forgot to ask the owner about this because the pork turned out to be quite delicious.

Aren’t you curious about this place?

It’s not even easy to find.

You need to cross over from the entrance of Jeju City’s KAL Hotel and head down a small road. Even then the road is not one people often frequent.

Plus when I saw the restaurant’s run-down exterior I didn’t even want to go inside. I’m sorry the owner has to hear this as well.

In fact I didn’t even know Iseorim existed until my friend introduced it to me. 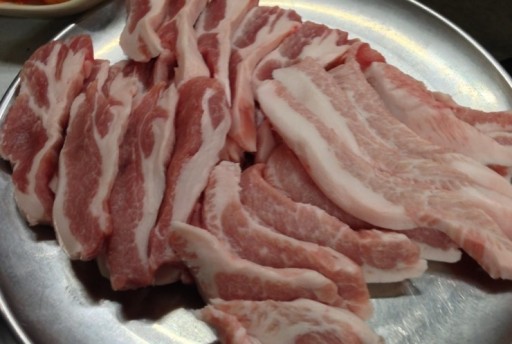 Jeju has a lot of pork restaurants, but after finding here and re-discovering a different type of pork I came to appreciate it more.

On the island we used to mainly eat thin pork. However, a few years ago fat chunks known as “geungogi” became all the rage and remain to this day. So it has been a while since I ate the thin pork.

However, I have to say Iseorim is a tasty, special, and delicious thin pork experience.

The owner also uses charcoal for cooking your meat. Start off by placing the meat all in the middle and then moving it over to the holes to finish off.

It is in this part of the grill the smokey charcoal aroma will soak into the pork making it even better.

The meat is also pre-chopped when it arrives at one of the six tables in the restaurant so there is no need to fight with scissors over the meal.

Apparently the person who supplies the pork was the friend of the friend who let me know about Iseorim at first.

There are no tourists and customers are also expected to get drinks and the simple, clean, side-dishes themselves.

But the pork is the main dish and fulfilled its duty.

I have to say, yes, the interior of the restaurant continues a run-down theme, but this really is part of the appeal.

It is a place I imagine soju or makkoli going easily into my stomach on a rainy day.

Like I mentioned above, there are only six tables so if you’re going at dinner time you’re going to need to be lucky to find a spot.

When I’ve wandered down there before I wandered back home because the run-down restaurant, both inside and outside, is full to the brim with customers.

Iseorim must be getting something right?

Opening Hours: From 5 p.m. until late