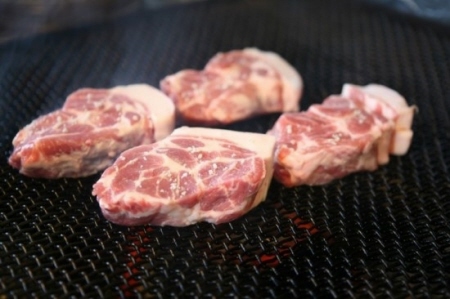 Just looking at the meat makes your mouth water.

Geun is a Korean measurement unit equivalent to 600 grams and there are a few famous restaurants on Jeju Island that serve meat using this unit.

Open since August 2010 it has gone on to expand into Ido-2-dong and another place in the middle of the city.

However for this post I’m introducing the main location in Samyang.

Other similar restaurants have also appeared nearby making the whole area a bit of a meat lovers paradise.

Curiously the owner didn’t originally have a background in this industry. In 1988 he opened a beauty salon on the island called Gaesongyeonchul. It was quite special at the time as he was one of the first men to enter a female dominated field.

Yet he went on to be very successful, opening a further six franchises and a beauty institute.

Eventually the owner’s back pain grew too much from standing up all day. So he left the business behind to travel the world.

While traveling he realized food was becoming the most memorable part of the trip. Thus upon returning to Jeju he decided to open a meat restaurant.

After settling upon the geun measurement idea more thought was needed as to how to cook the meat. Given its thickness a certain amount of pre-cooking would be needed.

The coals were procured from Gangwondo and combined with the wood of Jeju’s tangerines trees to complete the pre-cooking method.

Hungry people will not have to wait as long when compared with other restaurants.

The tangerine tree wood is dried for two months prior to being used. Many customers don’t know this happens. 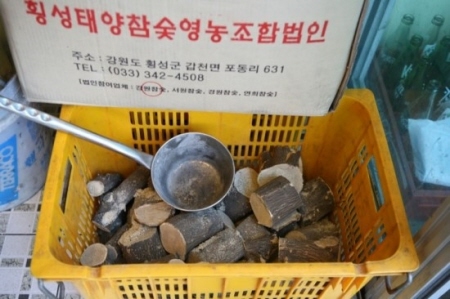 The owner is also has an affection for the military and calls himself Sergeant Oh. 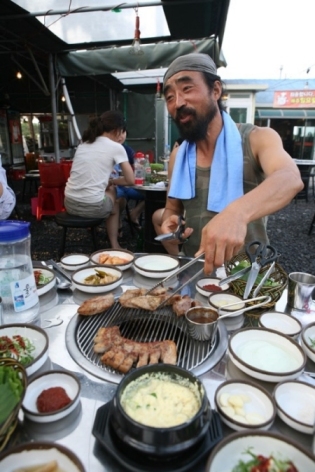 Even the place you eat in has a rough and ready army feeling to it.

Actually customers arriving in military uniform will get a discount.

Also at a restaurant event if customers bring a 100 won coin dating specifically from 1988 then they will get a bottle of soju for free.

The owner’s advice is to not chop the meat too thinly. Enjoy the thickness and juiciness of it. He also suggests getting the kimchi jiggae (small 6,000 won | large 12,000 won). Have a refill for 2,000 won if you need more.