The oreum’s eastern side is also a location for one of three main shrines on the island. It is called ‘Dangmogitang’ or ‘Chagwidang’ and the shrine is thought to have been there since the Tamra era. A snake deity and ghost were worshiped.

However, Dang Oreum finds itself nestled in the countryside and coastal setting of Hangyeong-myeon, Gosan-ri, and Yongsu-ri. It is 148 meters from sea level and 118 meters from the ground. Size wise this is quite normal for a Jeju oreum.

There is a horse shoe shaped crater, which is large considering the oreum’s average height. Inside this crater sits another oreum, Dangsanbong Albong, so it has a special double classification, rather like Malmi Oreum and Jeoluli Oreum.

Jeju Olle Trail Route 12 only skirts the western side of Dang Oreum. Therefore many people don’t venture to the summit on the trail I took.

For detailed entrance information, including a map,  please click this link.

On the way to the summit you’ll pass pine trees living with linden trees in harmony. The south and east side of the oreum are steep but the trail itself is agreeable. After 20 minutes or so you’ll reach the top. Keep going further to the west for the revered turtle-shaped rock.

It is a good place to rest. Take in the surrounding views, which are breathtaking. The Gosan plains stretch out before you. This flat fertile land is extremely rare to see on Jeju Island.

You also look down on the Gosan Prehistoric Site. Neolithic humans once lived in this location with their stoneware. The humans have since gone. Now the their leftover stoneware has been dug up and moved to a museum. An information board serves as a reminder for visitors next to the yellow grass field. 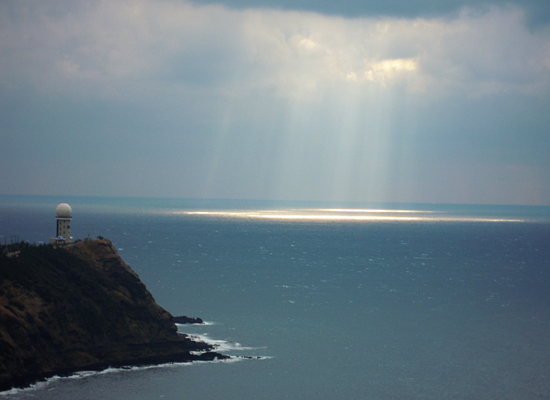 We can see Suweolbong and the coast.

Nunseom (Wa-do) is visible on the right hand side of the photo below. The island’s shape gives an impression of a person lying down. To the left is Chagwi-do.

Choosing the path which follows Jeju Olle Trail Route 12 past the white buildings on the right side of the photo leads to Yongsu Port. More views of Nunseom and Chagwi-do are to be had along the grassy path.

Finally you’ll reach the port, which has the tombstone and Joseon Dynasty story of Mrs. Go. This woman killed herself after losing her husband in the ocean near Chagwi-do. On March 15 of every year, villagers pay their respects for this woman’s loyalty to her husband.

Looking at the photograph again the path down to the buildings at Jagunae Port and to the left follows Jeju Olle Trail Route 12 too. Going this way hugs base of the steep cliff faces to Suweolbong, which is a World Geopark.