– From our Korean tourism diarist – 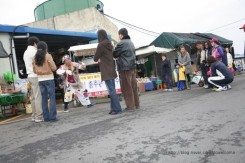 This is the Seogwipo 5 Day Market. It is a place where you can really feel people as they go about their business.

Yet this wasn’t always the way on Jeju.

Until the end of the Joseon Dynasty there were no proper markets. Then during the transition period known as Guhanmal from the final dynasty years and before the Japanese colonial period the markets appeared.

Fast-forward on to 1970s Seogwipo. Tourism, tangerines, and a general growth in Seogwipo’s economy saw a need to establish a 5 day market there. Farm products and the exchange of information rolled in from across the rural areas.

So Seogwipo’s market began in Seohung-ri on March 22, 1974 then later moved to its current place in Donghung-dong in 1995.

In 1999 there was more refurbishment including parking spaces and bathrooms. In 2002 more land was bought. In 2004 and 2006 the market covering was improved with further car parking added in 2007.

It has actually been a long time since I visited the market. There have been a lot of changes. Maybe due to the parking and bathroom that’s why more people come.

Everyone will be happy if this old traditional market can keep on going I think.

Now the stores total 547 and every time the five days rolls around $200,000 changes hands.

Another thing worth noting is the customer service policy – the first of its kind across the whole nation.

In it the market and market sellers pledge for customer satisfaction with a variety of products. Plus the price will be cheap, there will be good trading ethics, an indication of a product’s origin, clean parking and bathroom facilities.

On top of that there’s a blacksmith experience where you can make or buy items.

Of course supermarkets also offer cheap and convenient shopping, but using the local places like the Seogwipo 5 Day Market can help the local community.