On September 19, 2015, Halla Library was filled with sounds of children laughter and various displays of books as it celebrates the 2015 Book Festival for children (책잔치).

There were different booths for fun activities, such as making candles, making ice cream, folding origami, designing a bag, making a fan, etc. 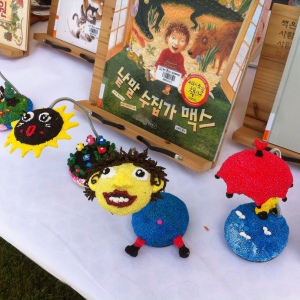 Throughout the festival, there were several displays of books.

Children were encouraged to write down their thoughts and feelings.

Parents and children opened their own little shops to sell used books and other children items.

This quote is displayed inside Halla Library, reminding us all that “The only true equalizers in the world are books; the only treasure-house open to all corners is a library; the only wealth which will not decay is knowledge; the only jewel which you can carry beyond the grave is wisdom” (by J.A. Langford).