You can also find more information on what to do and see while here by consulting VisitJeju.net.

Festivals that will make the hot summer and sweet autumn more joyful are held in every corner of Jeju-do. Rest your body and mind with abundant spectacles, plays, and eateries at the festivals.

Commemoration of the spirit of Chusa Kim Jeong Hui,

Daejeong village Chusa culture art festival is the event commemorating the spirit and works of Chusa Kim Jeong Hui. In the past, in the Joseon Dynasty, with the link to ‘Death in Prison of Yun Sang Do’, Kim Jeong Hui was exiled at Jeju Daejeong village for 9 years, but studied harder even with the harsh exile life, and led the education of Jeju-do people. Daejeong village Chusa culture art festival held every year since 2002 starts with the yearning rite which commemorates the spirit of Chusa, and it has various experience events such as the reenactment of exile procession, traditional poem writing, exhibition of books, stationery exhibit of Chusa material and various folk material, writing family mottos, traditional wedding experience, rubbing stone text, walking exile trail, etc. In 2007, since ‘Chusa’s exile house’ was upgraded to major historic heritage, and as in 2010, when the Jeju Chusa Memorial House was completed, the Daejeong village Chusa culture art festival is becoming a more diverse and colorful festival. 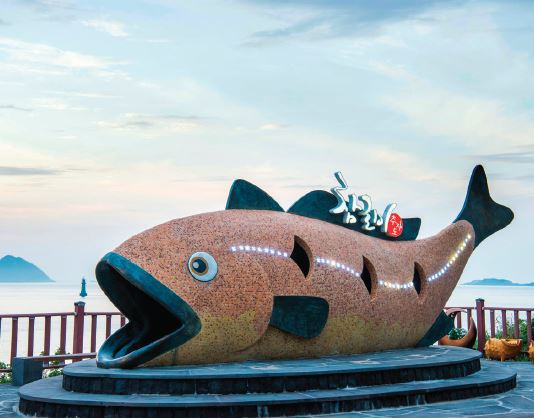 The history of a thousand years of Tamra at a glance!

First held in 1962 with the name of ‘Jeju Art Festival’, the Tamra culture festival has a long history with its 56th festival this year. Tamra Grand festival, held with a new slogan and name every year, will be an excellent opportunity to show the essence of the culture of one thousand years of Tamra to the tourists visiting Jeju. The main event is held at Tap-dong plaza near Jeju Culture Center, and with the start of the ‘Ritual Festival’ wishing peace to the Jeju-do people and cultural revival, various festivals of more than 10 festivals are held every day including ‘Jeju Original Culture Festival’ succeeding Jeju’s original culture, ‘Jeju Intangible Cultural Asset Festival’ performed by intangible cultural assets inhabited with the spirit of Tamra people, and the ‘Participating Culture Festival’ making the harmony of Jeju-do people and tourists, etc. Along with the first day’s opening festival, the closing performance on the last day provides abundant spectacles crowded with all tourists that are visiting Jeju. 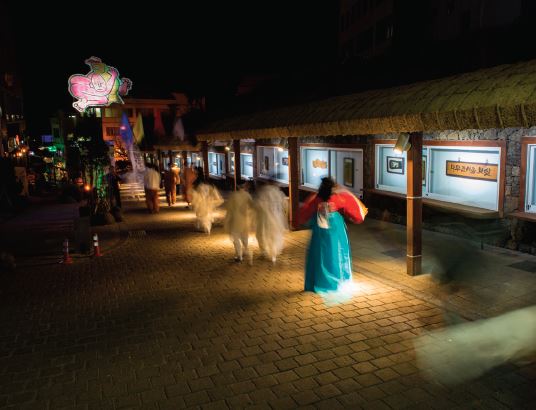 Exploring the wisdom and culture of people in old times 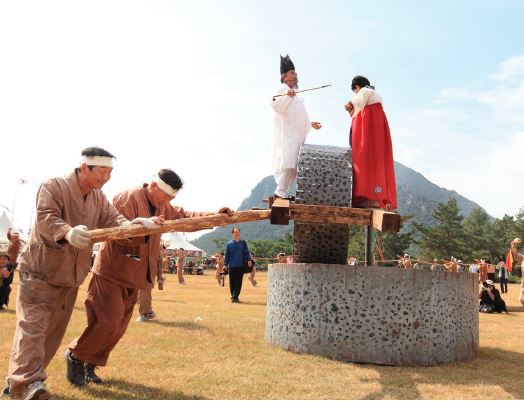 Jeju-do, isolated from the main land, valued the living essentials from the old times. It wasn’t easy to have trade with the main land against the waves and crossing the long ocean path, so Jeju-do people chose self-sufficiency. Seogwipo-si Andeok-myeon Deoksu-ri was like a small factory for Jeju-do people producing and supplying various necessary goods. Deoksu-ri Traditional Folk Custom Reenacting Festival is held every year to show the wisdom and culture of the people in old times who made and supply living essentials through various material including straws, horse tail, and wood, etc. Traditional plays such as hoop rolling, throwing the shot put, Jangyunnori, etc. and events such as Gotjawal walking, hanging stripes on the house, writing the house motto, making the photograph frame, etc. are also held. Representative ‘Mortar Stone Rolling Song’ of Deoksu-ri, designated as a major intangible cultural asset will also be performed for the tourists.

At Seongeup Folk Village, where Jeju-do’s unique traditional culture is vividly apparent, various cultural events are held every October. You can make and taste traditional rice cakes such as Momul beombeok, Sangoe Tteok, Geonggi Tteok, Momul mandi, Omegi tteok, Chin tteok, etc. that you can only taste in Jeju, and you can experience Jeju-do’s unique traditional customs such as hanging straw on the roof, Jeju’s traditional wedding, making a kite, threshing in the yard, Goragolgi, Milling, etc. Jeongeui Village Folk Festival, held from 1994 for the harmony of village residents and the succession of traditional culture, as it is held year by year, became the outstanding traditional festival, not just the small event of Pyoseon-myeon residents, but publicizing the unique living customs and culture of Jeju-do people in old times to the tourists. A fireworks event is held on the last evening of the festival, and it will provide unforgettable memories for the tourists.

Bonggaedong, where Bonggae Peace Trekking festival is held, is a popular place for good scenery. It is closest from the downtown, and the beautiful Jeju Jeolmul Natural Recreation Forest is nearby, so the tourists can easily enjoy the beautiful scenery and trekking. Along the tracking course, you can see various sizes of small oreums centered on Jeju 4.3 Peace Park and wild plant groups. Also, it is designed with an easy route so that Jeju-do people and tourists can participate without experiencing any burden. Bonggae Peace Trekking Festival provides various spectacles including enjoying the beautiful nature of Jeju-do, visiting historical sites, and experiencing the old agricultural culture of Jeju. Also, many participation type programs including the environmental experience, straw clothes experience, book text engraving experience, etc. and various subsidiary events such as auto-camping site, Summer night’s music concert, fireworks, etc. are prepared.

Held in the home of the horses,

Jeju Horse festival is the only festival in Korea with the theme of the horse. Stationary exhibitions related to horses, and various subsidiary events such as horse riding experience, horse meat tasting, demonstration of cooking by famous chefs, singing competition, OX quiz for all participants, etc. are prepared. On the first day of the festival, starting with the Pungmul street play, ‘Jeju Big Ritual’, intangible cultural asset No. 13, wishing for a successful festival, is held. The big ritual demonstration is held in the order of Chogamje, Yong nori, Buldo Maji, Chogongjilchim, Yeonggam nori, and some experience opportunities are provided to the visitors. After the big ritual, the visitors may learn the songs of the ritual such as Seoujet Sori and Dambul Sori, etc. with the instruction of Seosunsil Simbang, and you can taste the ritual food directly at the site. Exciting performances are held by famous singers on the stage, and around the vast ‘Let’s Run Park’, various experience stages are held.

Stay cool at the beach during hot August 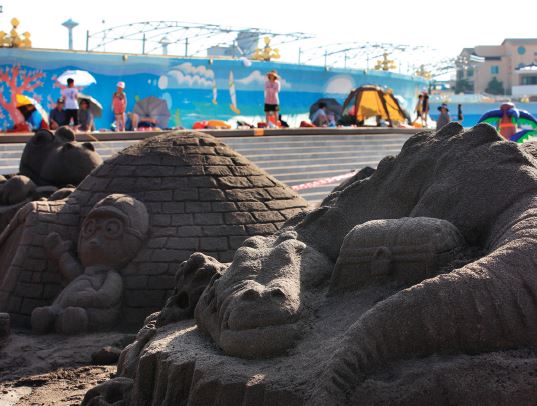 The name ‘Soesokkak’ came from the shape of the lying down cow. Fresh water flowing from Hyodoncheon meets the sea water, making the deep-water puddle of the shape of ‘cow’, and ‘cow (So)’ and ‘end (Kkak)’ of the stream are combined to become Soesokkak. Soesokkak is one of the hidden sceneries along the seventy miles of Seogwipo, it is also a must-visit place for tourists in Jeju. Soesokkak Black Sand Festival is held in August, when most of water is gathered, and it is composed of finding treasure hidden in black sand, family health event, ‘Run with upholding family’, and all visitors participating in the ‘Adult Singing Festival’, invited famous singers’ performances, and drawing lots for presents, etc. Unlike the regional festivals mostly held in autumn, the Soesokkak Black Sand Festival is held in the summer, and it will present wonderful memories to the summer vacationers visiting Jeju.

Island, the Resonance of the Wind! 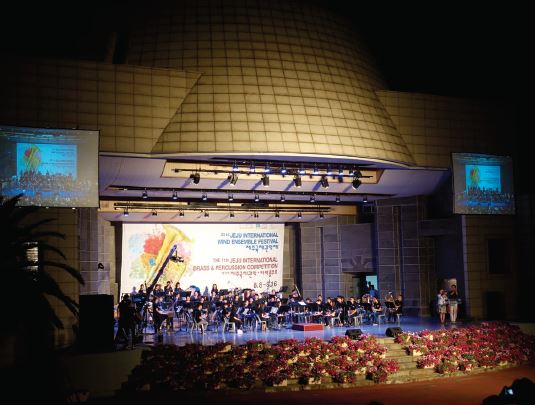