– From our Korean travel diarist –

Sanji Lighthouse is a wonderful place to see all of Jeju City and Jeju Harbour at a glance.

Visitors will also find it located in Sarabong Park, which is popular with both tourists and residents for exercise and walking along a coastline that looks like a water color.

The lighthouse is also one of the island’s 31 hidden beauties chosen in July 2009.

The way up is simple and convenient enough especially because my house is close by.

You can get into the lighthouse grounds between 9 a.m. and 6 p.m.

The original building came into being in 1916. It was unmanned, but later changed to manned and operated until 1999 when a new one was built.

Spreading out before us is Jeju Harbour.

In winter the days are short, so I snapped this photo before darkness descended. 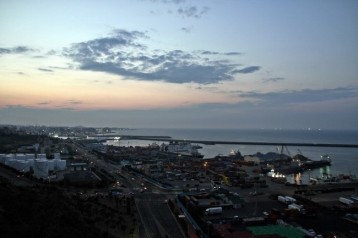 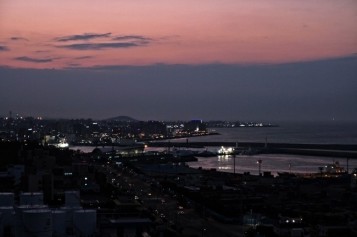 Many airplanes flying in from the mainland have their flight path pass over on the way to the airport.

Early evening is beautiful. Night even more so.