As you step into the Dolhareubang Park a big dolhareubang (stone grandfather) will greet you with flowers in hand. The other extends towards towards you for a hand shake.

This is a dolhareubang made for the tourists and isn’t what they usually look like.

Jeju has many tourist attractions which can also be appreciated at other destinations in the world, but the dolhareubang and Dolhareubang Park is uniquely ‘Jeju’.

This place doesn’t have colorful exhibits or stimulating displays. Instead it provides  a satisfying simple representation of how the island really was.

It was and still is an island of rough rocks and strong winds.

There were no large areas of fertile soil for cultivating crops. It was also hard to draw water.

So the people who lived in and endured this difficult environment needed something they could pray to for hope, happiness and a son. 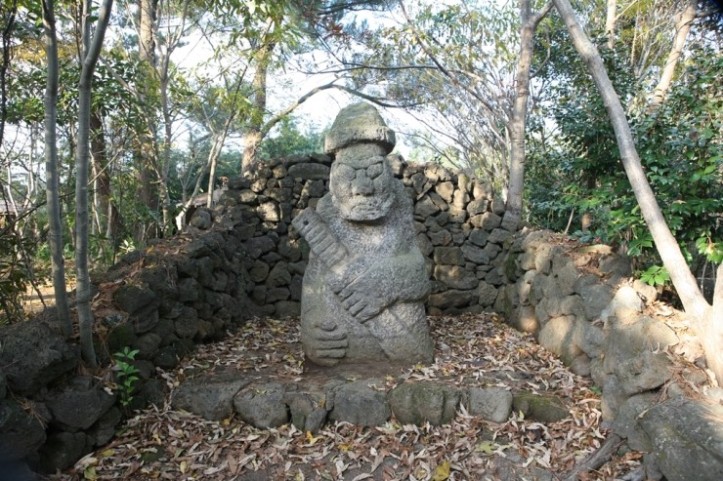 In Korean culture a son is very important for carrying on the family linage.

There is a saying if you grind the nose of the statue and drink the powder you shall get pregnant.

So in this picture you’ll see there’s no nose.

Of the original 48 surviving statues, 21 have their home in the Jeju City area, 12 are in Seongeup and 13 are in Daejeong (one of which is in an unfinished condition).

Finally, two are on display at the National Folk Museum of Korea in Seoul.

According to their location there is some slight variation on the design.

Traditionally the dolhareubang share common characteristics such as big round eyes, a big nose, big ears and pursed lips.

Yet in the Jeju City area only the torso is visible. They are generally taller than other regions.

In Daejeong the dolhareubang are smaller, but the face takes up half of the statue. The eyes are more prominent.

Actually the name dolhareubang is not an old term.

From only 1971, when the statues became a registered folk property, did this word become their official title.

With the hands resting on the stomach area its almost like there’s a laugh waiting to escape the smile.

But maybe this smile is more like a frown depending on the viewers mood. The mood of the Mona Lisa?

There is also a light-hearted take on the dolhareubang in the park.

Here we see a dolhareubang being created on canvas by a model of Vincent van Gogh. The white bandage gives it away doesn’t it?

Next to this dolhareubang stands a model of the famous Korean novelist, Lee Oisoo.

This is the entrance to the Dolhareubang Park . The ticket office looks a bit like a caravan and doesn’t seem to exactly fit with Jeju’s unique stone walled roads. But in some cute way it does match.

The owner has a workshop here. You can see his creations on a second floor gallery and even browse some for sale in the gift shop.

*The Dolhareubang Park is located in Bukcheon as you head out to the east side of the island along the coast. You’ll pass Hamdeok.